Skip to content
The World According to “Poor Charlie”

The World According to “Poor Charlie”
Charlie Munger, Warren Buffet’s number two speaks to Kiplinger’s about investing, Berkshire and more.

Charlie Munger has been Warren Buffett’s partner and alter ego for more than 45 years. The pair has produced one of the best investing records in history. Shares of Berkshire Hathaway, of which Munger is vice chairman, have gained an annualized 24% over the past 40 years. The conglomerate, which the stock market values at $130 billion, owns and operates more than 65 businesses and invests in many others. Buffett’s annual reports are studied by money managers. But Munger, 81, has always been media shy. That changed when Peter Kaufman compiled Munger’s writing and speeches in a new book, Poor Charlie’s Almanack: The Wit and Wisdom of Charles T. Munger ($49.00, PCA Publications). Here Munger speaks with Kiplinger’s Steven Goldberg.

Buffett was a student of Ben Graham, the father of security analysis. He was buying deep value stocks — “cigar butts” — until you got involved.
If I’d never lived, Warren would have morphed into liking the better businesses better and being less interested in deep-value cigar butts. The supply of cigar butts was running out. And the tax code gives you an enormous advantage if you can find some things you can just sit with.

There are a whole lot of reasons, and Warren was a natural for always just getting smarter. The natural drift was going that way without Charlie Munger. But he’d been brainwashed a little by worshiping Ben Graham and making so much money following traditional Graham methods that I may have pushed him along a little faster in the direction that he was already going.

How do you work together?
Well, it’s mostly the telephone and as the years have gone on, and I’ve passed 80 and Warren is 75, there’s less contact on the phone. Warren is a lot busier now than he was when he was younger. Warren has an enormous amount of contact with the operating businesses compared to what he had early in his career. And, again, he does almost all of that by phone, although he does fly around some.

What are your work styles like?
We have certain things in common. We both hate to have too many forward commitments in our schedules. We both insist on a lot of time being available almost every day to just sit and think. That is very uncommon in American business. We read and think. So Warren and I do more reading and thinking and less doing than most people in business. We do that because we like that kind of a life. But we’ve turned that quirk into a positive outcome for ourselves.

How much of your success is from investing and how much from managing businesses?
Understanding how to be a good investor makes you a better business manager and vice versa.

Warren’s way of managing businesses does not take a lot of time. I would bet that something like half of our business operations have never had the foot of Warren Buffet in them. It’s not a very burdensome type of business management.

The business management record of Warren is pretty damn good, and I think it’s frequently underestimated. He is a better business executive for spending no time engaged in micromanagement.

Your book takes a very multi-disciplinary approach. Why?
It’s very useful to have a good grasp of all the big ideas in hard and soft science. A, it gives perspective. B, it gives a way for you to organize and file away experience in your head, so to speak.

How important is temperament in investing?
A lot of people with high IQs are terrible investors because they’ve got terrible temperaments. And that is why we say that having a certain kind of temperament is more important than brains. You need to keep raw irrational emotion under control. You need patience and discipline and an ability to take losses and adversity without going crazy. You need an ability to not be driven crazy by extreme success.

How should most individual investors invest?
Our standard prescription for the know-nothing investor with a long-term time horizon is a no-load index fund. I think that works better than relying on your stock broker. The people who are telling you to do something else are all being paid by commissions or fees. The result is that while index fund investing is becoming more and more popular, by and large it’s not the individual investors that are doing it. It’s the institutions.

What do you think of the efficient market theory, which holds that at any one time all knowledge by everyone about a stock is reflected in the price?
I think it is roughly right that the market is efficient, which makes it very hard to beat merely by being an intelligent investor. But I don’t think it’s totally efficient at all. And the difference between being totally efficient and somewhat efficient leaves an enormous opportunity for people like us to get these unusual records. It’s efficient enough, so it’s hard to have a great investment record. But it’s by no means impossible. Nor is it something that only a very few people can do. The top three or four percent of the investment management world will do fine.

What would a good investor’s portfolio look like? Would it look like the average mutual fund with 2% positions?
Not if they were doing it Munger style. The Berkshire-style investors tend to be less diversified than other people. The academics have done a terrible disservice to intelligent investors by glorifying the idea of diversification. Because I just think the whole concept is literally almost insane. It emphasizes feeling good about not having your investment results depart very much from average investment results. But why would you get on the bandwagon like that if somebody didn’t make you with a whip and a gun?

Is finding bargains difficult in today’s market?
We wouldn’t have $45 billion lying around if you could always find things to do in any volume you wanted. Being rational in the investment world at a time when other people are losing their minds — usually all it does is keep you out of something that causes a lot of trouble for other people. If you stayed away from the mania in the high-tech stocks at its peak, you were saved from disaster later, but you didn’t make any money.

Should people be investing more abroad, particularly in emerging markets?
Different foreign cultures have very different friendliness to the passive shareholder from abroad. Some would be as reliable as the United States to invest in, and others would be way less reliable. Because it’s hard to quantify which ones are reliable and why, most people don’t think about it at all. That’s crazy. It’s a very important subject. Assuming China grows like crazy, how much of the proceeds of that growth are going to flow through to the passive foreign owners of Chinese stock? That is a very intelligent question that practically nobody asks.

What do you think of the U.S. trade and budget deficits — and their impact on the dollar, which Berkshire is still betting against?
It’s not at all clear exactly from some objective bunch of economic data just where the dollar ought to trade compared to the Euro. Who in the hell knows? It’s clear that you can’t run twin deficits on the scale that the U.S. has forever. As [economist] Herb Stein said, “If something can’t go on forever, it will eventually stop.” But knowing just when it’s going to stop is a very difficult matter.

Is there a bubble in the real estate?
When I see people going to some old flea-bitten old condo and the list price is $1.8 million, and they decide to put it on the market for $2.2 million, and five people start bidding for it, and they sell it for $2.7 million, I say that’s a bubble. So there are some bubbly places in the economy. I am amazed at the price of real estate in Manhattan.

So there is some bubble in the game. Is it going to go back to really cheap houses in good neighborhoods in good cities? I don’t think so. So I think there will be huge collapses in some places, but, on average, I think that good houses in good places are going to be plenty expensive in future years.

Is there a bubble in energy stocks?
When it gets into these spikes, with shortages and uproar and so forth, people go bananas, but that’s capitalism. If the price of automobiles were going up 40% a year, you’d have a boom in auto stocks. But if you stop to think about it, of the companies that you could have bought in, say, 1911, to hold for a long time, one of the very best stocks would have been Rockefeller’s Standard Oil Trust. It became almost all of today’s integrated oil companies.

How do you feel most corporate citizens behave in the U.S.?
Well, I disapprove of the way most executive compensation is arranged in America. I think it goes to gross excess. And I certainly don’t like phony accounting that takes part of the real cost of running the business and doesn’t run it through the income account as a charge against the reported earnings. I don’t like dishonorable, lying accounting.

Do you think the stock market will return its long-term annualized 10% in the next decade?
A good figure for rational expectation would be no higher than 6%. I think it’s unreasonable to assume that the world is going to try to arrange itself so that the inactive, asset-owning class is going to get a much higher share of the GDP than it normally gets. When you start thinking that way, you get into these modest figures. The reason the return has been so good in the past is that the price-earnings ratio went way up.

Ibbotson finds 10% average returns back to 1926, and Jeremy Siegel has found roughly the same back to 1802.
Jeremy Siegel’s numbers are total balderdash. When you go back that long ago, you’ve got a different bunch of companies. You’ve got a bunch of railroads. It’s a different world. I think it’s like extrapolating human development by looking at the evolution of life from the worm on up. He’s a nut case. There wasn’t enough common stock investment for the ordinary person in 1880 to put in your eye.

What do you see for bonds?
The bond market has fewer opportunities now. The short-term rates are the same as the long-term rates, and the premium interest rate you get for taking risk is lower than it ought to be, given the risk. By definition, that’s a world in which bond investment is much tougher to do with great advantage.

What do you expect in terms of returns for Berkshire Hathaway?
We have solemnly promised our shareholders that our future returns will be considerably below our previous returns.

What happens to Berkshire after the two of you?
Well, the world will go on and, in my opinion, Berkshire will still be a strong, rich place and with a central culture that will be shrewd and risk-averse. But do I think that we will get another person better than Warren to come in and replace Warren? I think the odds are against it. 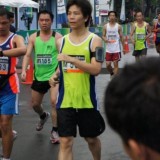